Raven has always been my favorite superhero. For those who don’t know anything about her, her father is a trans-dimensional demon with a lot of built-up hatred. She is the embodiment of the deadly sin pride. In short, her powers rely on energy manipulation and telekinesis. She lives life in constant knowledge that she was born to evil and is destined for destruction. So what does she do?

She joins the Teen Titans.

Yeah, I know. Poke fun at me for being a nerd as much as you want.

But when I was young, I watched the tv show and watched her control her emotions so that she could keep her powers in check. I started doing the same thing. If a kid made me angry at school, I would reign my emotions in instead of lashing out. I’d talk in a cold monotone with no expression. It’s a dangerous thing, keeping emotions pent up like that. As I got older I started being more honest about how I felt. At the time, though, I thought her powers and sarcastic remarks were so cool and so I imitated her.

However, when I grew older (and got to reading more of the comics), I began to respect Raven for different reasons. She is still my favorite superhero. I still think her powers are legit. I have a blue cloak and gold belt in my closet, I keep my comics of her in pristine condition, and—as is evidenced by the drawing below—I doodle her all over my sketchbooks, journals, and class notes. Now though, I like her because, despite every opposition and unlikelihood, she reigns her dark side in so that she can save others. She joins the Titans, falls in love with Gar (yes, I do ship them), and makes true friends. She overcomes her hatred and her loneliness and focuses on being a hero. She does the right thing, even when the right thing is so very hard to do.

That’s what I want to strive to be like. I don’t want to be Raven in every sense. I’ll pass on the half-demon drama. But I want to do the right thing, even when everything around me is making it difficult. I want to do what I can to be the best person for myself and others. I know I said I’m learning to focus on myself and, sure, I’ll do that over time. It just isn’t so easy for me to stop putting others first.

I’ll do what I can and stay true to me.

In a sense, I’ll be like Raven. I’ll do my best. I’ll do the right thing. No matter the difficulty. 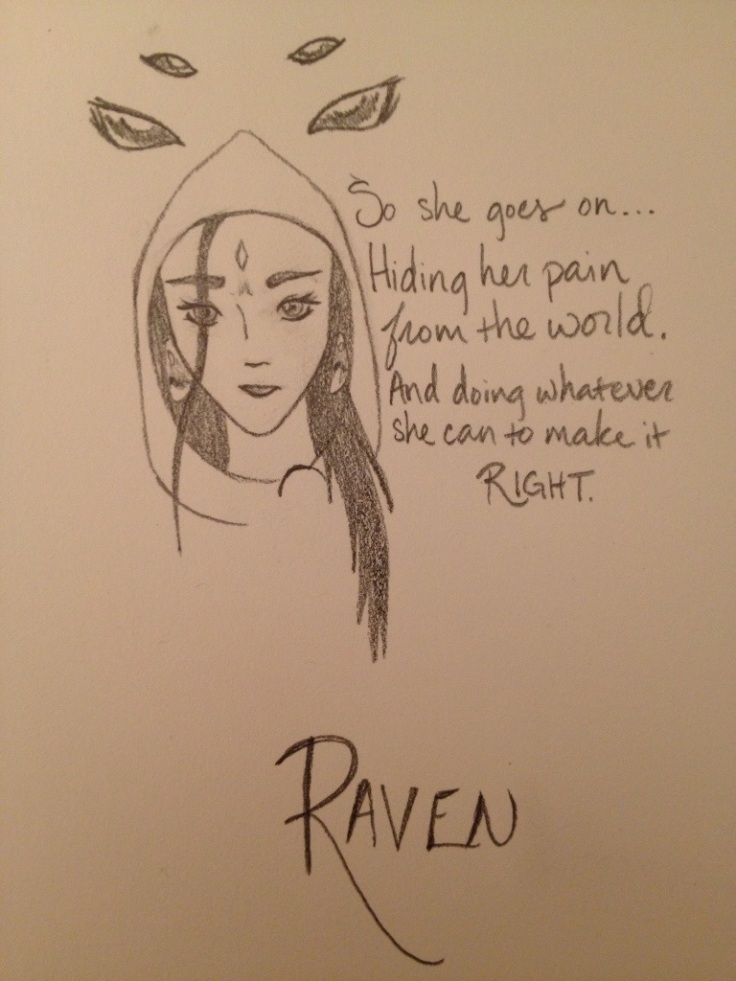 One thought on “Being Raven”