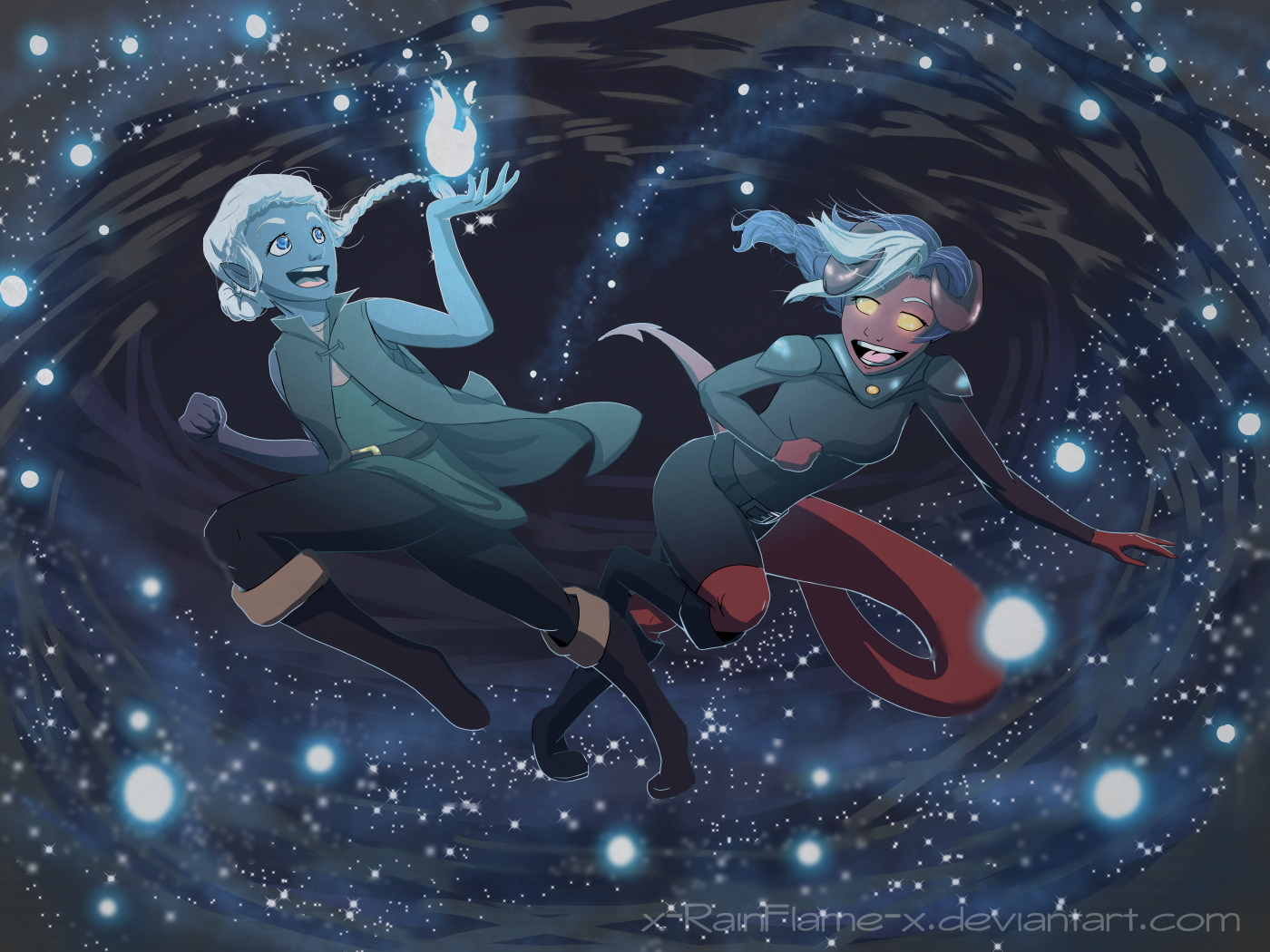 Two weeks after seeing Infinity War and I’m still not over it.

Don’t worry if you haven’t seen it; there won’t be any spoilers in this post. In fact the only reason I really bring it up is because my campaign D&D character for the past ten months has been Gameia, a tiefling assassin and the most dangerous woman in the realm, inspired by Gamora. And my best friend, Sam, has played her drow monk sister, Nova, our in-game equivalent of Nebula. In fact, our whole campaign was loosely influenced and inspired by Guardians of the Galaxy. It started as a joke, but quickly started to mean a lot to us. And you need to know all of that for the actual-play short-fiction piece that follows.

We happened upon these characters a bit by accident, which is a story I can share at a later point, but over time we’ve deeply connected with them. They’ve come to be an important part of our lives. Now Gameia prepares to fight her demonic father, Faranos, just like Gamora prepares to face Thanos in the film. But this scene was from far earlier in the campaign, detailing her first reunion with their father… Now just seemed an appropriate time to share it.

TL;DR: If you’ve seen Avengers, I’m sure you’ll get me.

When the goblin’s blade first sunk into her shoulder, Gameia’s vision blurred, and she imagined lights dancing into the cavern.

Then the blade withdrew, and the sting brought a sudden clarity.

The lights were real. Dancing lights. Her sister’s. Nova.

Gameia exhaled on a curse, launching herself back from the goblin. Her tail helped keep her balance, but she’d lost a lot of blood. She swayed as she landed, drawing her rapier close to her chest. Pivoting to dash away from the battle. Getting down the hall.

Getting to her sister.

All that mattered was following the lights. Just as she had when they were children.

At the fork, she veered left, down another tunnel.

In her mind, she could hear the memories: the soft crying at night that they didn’t want him to hear, the clash of weapons forged to be deadly in hands forged to be deadlier, the tearing of flesh before he’d heal their wounds and make them begin again.

The pain of those memories was always buried just beneath the surface. But she always tried to keep it at bay.

Now, she pressed the palm of her free hand into the wound at her shoulder to distract her. She grit her teeth and tasted bile, but the physical pain took the edge off the thoughts in her mind.

She and Nova may not have been on the best terms lately, but they’d alway been there for each other. And Gameia was not about to leave Nova to face this alone.

Rounding a bend in the tunnel, she could see Nova kneeling on the ground. Even from a distance, Gameia could tell her sister was shaking.

She skidded to a stop, her cloak settling behind her as the cavern widened out around her. Looming over Nova was an intimidating hooded figure clad in dark armor. What could be glimpsed of his form underneath was inhuman, demonic, but all too recognizable.

“Ah,” he breathed a sigh, lifting his burning gaze from Nova. “How nice of you to join us, daughter.”

Nova pounded the ground with her fist, unable to find words.

Gameia only found one; she cursed again.

With her words gone, Gameia soundlessly moved to her sister’s side, placing a hand on Nova’s shoulder. As if such a shallow comfort would make an impact.

Quilos chose that moment to announce, “Face me, demon, for I am Star-Lord, a holy warrior of Helm!”

Gameia knew Quilos’s flail would make no difference against the fiend before them. Even Gameia and Nova themselves, two of the most dangerous women in the realm, were no match for their father, Faranos. Quilos would fall. As would they all.

Faranos ignored the paladin’s outburst completely, keeping his attention trained on the sisters.

Gameia put all the energy she could muster into a glare. “I’m always angry. It may have something to do with my upbringing.”

Faranos’s lips curled upward. “Shame. I had hoped you’d lighten the mood with your presence. Nova has been such a disappointment in that respect.”

Nova’s throat tightened like she was choking on all the things she wanted to spit at him. Her aubergine skin twitched around her eyes.

Gameia raised her chin and bit out, “When have I ever lightened the mood?” If she could keep talking, perhaps she could draw Faranos’s ire from Nova.

But Faranos was infuriatingly casual as he shifted his weight to his other monstrous hoof. “I would argue that you have for the many souls you’ve killed. What dreary lives they had ahead of them. Such pain and suffering.” His sneer widened to show teeth. “You granted them a favor. I’m… proud.”

And that was all it took. Any word she’d mustered to draw Faranos’s attention escaped her. She was rendered useless.

“Everybody! Get out!” Racket hissed at them, scampering to the tunnels edge. The raccoon motioned frantically, but Gameia and Nova stayed where they were, paralyzed.

Faranos turned, his cape spinning around. In a fluid motion, he thrust his hand into a barred cage, yanking a boy through the steel rods. The boy screamed and flailed, but was noticeably weak. This was the boy they’d been tasked to find. But not like this…

Faranos held the child aloft like a trophy. Another innocent spoil of his war, twisted for some unfathomable purpose. Like Nova had been. Like Gameia had been.

Gameia helped Nova to her feet. And for the first time in two years, she wrapped her sister in an embrace. To her surprise, Nova hugged her back. It was tense, but gentle.

“Are you okay?” Gameia whispered into Nova’s pale hair.

“Hardly,” Nova replied bitterly before her voice softened. “Are you okay?”

Gameia didn’t bother to respond. Tears waited at the brim of her eyelids. She couldn’t blink them away, but they didn’t spill over either.

“Guys, now would be a good time to run,” Racket snapped, a little more loudly this time.

Gameia drew back her rapier and launched herself at her father.

With a roar, he struck her with his massive hand. Her back slammed against the wall, sending pain through her wounded shoulder that ricocheted through her other scrapes and bruises. She sputtered, coughing blood and spitting it to the side. She couldn’t move her back. Couldn’t breathe in.

Nova went flying the opposite direction, the boy’s body knocking her to the floor.

Quilos charged in next, swinging his flail. But Faranos only laughed. He grabbed the flail by the chain and launched it across the room.

Nova took the opportunity to run, the boy wrapped tightly in her arms. Racket ran with her. Then Nova disappeared, her dark skin lending her to the shadows.

Gameia stumbled to her feet. Faranos laughed, and the entirety of the mines shook at the sound. Gameia spit again, trying to avoid choking on her own blood. She would not die here. Not before she could at least face him in a fair fight. Not before she could avenge the lives he’d taken – including hers and Nova’s.

Her golden-yellow eyes met Quilos’s from across the cave. “Sorry,” she whispered. She didn’t have the strength to shout. And she doubted he could even hear her. But after ten years of knowing her, he understood.

“Go! Save the boy and the others!” he cried defiantly. “Save yourself!”

Her eye caught on something flickering at his waist, but she had no time to process. She was already fleeing.

Blade struck armor behind her, and she could hear her father bellow in rage. Quilos may not survive the encounter, but with his god at his back, he may yet give Faranos a fight to remember.

With that thought giving her a burst of hope and adrenaline, she rushed through the tunnel, following the rest of her party. Around her, the walls of the mines trembled and groaned. She vaguely wondered if the battle behind her could be affecting the entire tunnel system.

Pebbles quaked at her feet and stalactites drove towards the ground, their sharp points shattering on impact. Something far behind her exploded, the sound echoing through the mines. The ground shook outright. Dust clouded around her ankles. Then a swath of the ceiling crashed to the ground.

The impact propelled her forward. Fresh air filled her lungs, and as she fell, she realized she was again surrounded by trees. Her palms met grass when they slammed against the ground.

But Nova and Racket had made it out. And the rest of their party was here as well. But Quilos…

Racket swore. “Guess I should hold off on the ‘I told you so,’ huh?”

Gameia didn’t even have strength left to glare. But that would change before she met Faranos again. And she would meet him again.

She’d take everything he’d made her into – through blood and steel and pain – and turn it against him. He’d forged her into a weapon – the weapon that would end him.