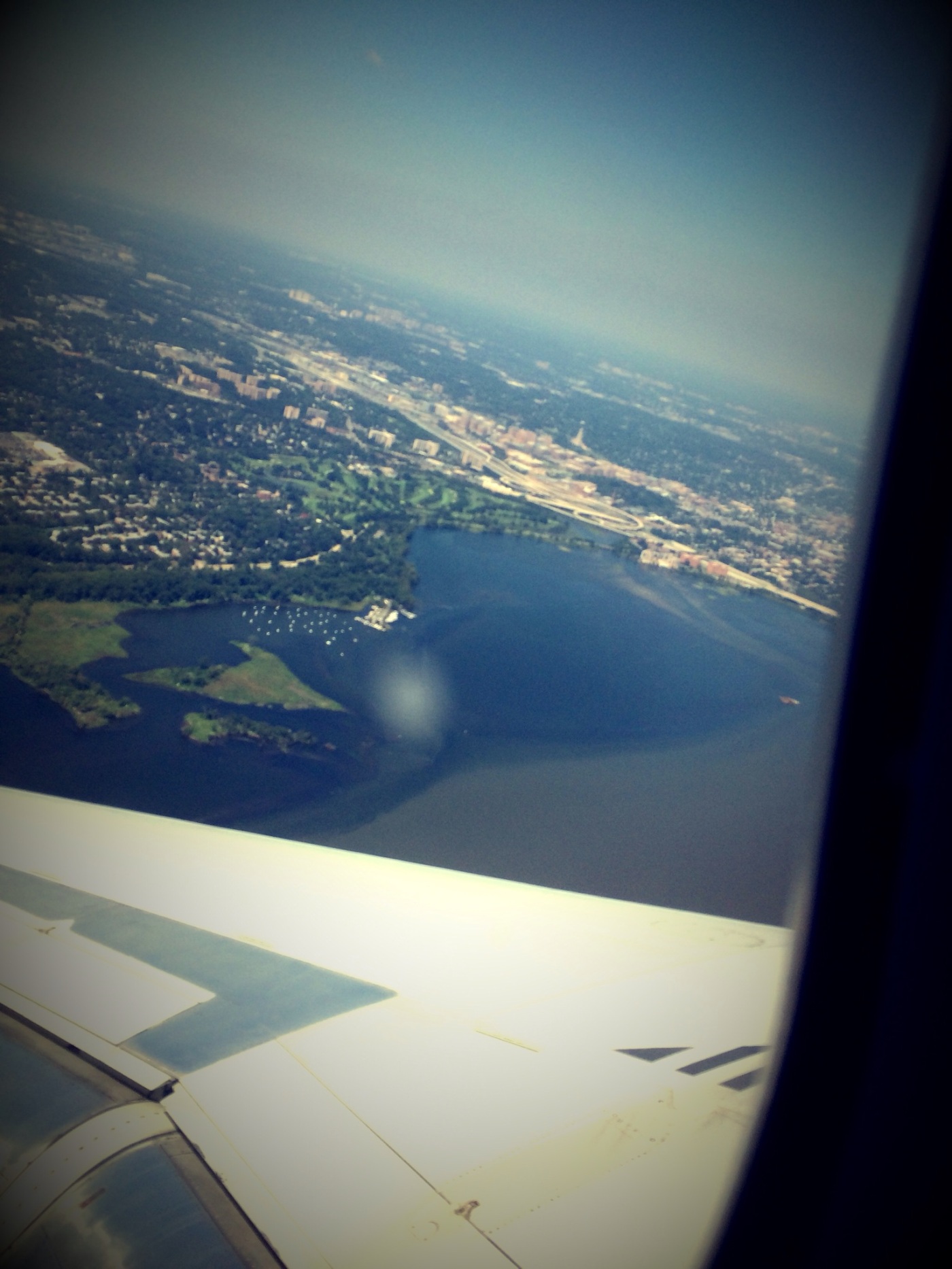 (The first glimpse of the city out the window of the plane.)

True to form, the very first thing I did when I arrived in D.C. was get sick.

It wasn’t a terrible illness, but the cold put quite the damper on my orientation experience. I slept far more than I was awake, which is very unlike me. And imagine my dismay that my first impression on my roommates was snotty, sneezy, and sleepy!

First impressions are crucial in forming an attitude with which to face the year. Thankfully, the first impression D.C. made on me was close to perfect. I had to fight through the illness to get out and do anything, but even when I was stuck in the apartment, I was basking in the city. I enjoyed every second (even the ones I slept through) just because I’m here.

And I’ve still managed to get in a number of “firsts.”

– I’ve been to the national mall for the first time. I didn’t feel remotely like a tourist. Actually, I felt like I belonged there. It was so natural, so expected. Every time I look out a window, really, I feel like I belong here. I’m living here and working here for 15 weeks. I’m no tourist; I’m a part of the city.

– I’ve already seen my first rain. And my second, for that matter. We’ve been warned to keep an umbrella on us at all times (and I’ve felt super classy carrying my new umbrella from H&M). I keep watching the rain with an awe that no one seems to understand, especially if they see rain all the time. But hey – rain is a powerful thing, and we don’t see much of it in Texas.

– I love the first impression I’ve gotten of my roommates. Katie and I share one bedroom, while Aki and Jasmin are in the other. They are fantastic girls, so nice and so understanding, and I hope to get to know them better as the semester goes on. Maybe next weekend, I’ll actually be able to go out and grab dinner with them.

– I’ve had my first soda since giving them up. This is a little disappointing, since I only gave them up less than a week ago, but Sprite is my self-proclaimed cure-all. Cold, stomach ache, or you name it, and Sprite will make me feel better. Of course, I rarely touch it unless I’m sick. So, other than a few glasses of Sprite, I’ve been doing fairly well on the soda front.

(My last soda before giving them up.)

– I’ve ridden the metro for the first time and feel like a pro. I am confident that I could find my way around D.C. in a heartbeat. The iTrans app helps, telling me exactly what trains to take. The system just isn’t as complicated as I expected it to be, so I’ve just stayed confident and walked. Plus, I love the feeling I get of just being a part of that flow: so professional, so adult, and so active.

(The metro: hot, muggy, but thrilling.)

– And speaking of adult and professional, I’ve had my first day of course programming. The greatest thing about it though, was that we were treated like adults. We were required to go for our course programming, and, though our coordinator gave us directions, he let us go entirely on our own. Being treated like an adult instead of a student is a refreshing breath of air. I’m about to face the world on my own, more or less, and I need to know how to do that. Having that precedent set early on, makes me excited for the responsibility the year will hold. (Silly, right?)

– Then there was my first event. After staying in bed basically since I arrived, I finally got out for the annual Labor Day concert. I only expect to be in D.C. this one Labor Day and the opportunity was too good to pass up. And I was right; it was totally worth the effort. The music (which included numerous patriotic pieces, Broadway, Beatles, and more) really warmed my heart. After the night as over, I felt pretty dizzy, but I was desperate to get out, and I am so glad I had.

(If this is beautiful,the music was so much more so.)

Then there are the firsts I have not had yet.

But, of course, I’ll be sure to keep you posted on my adventures as they come, firsts or otherwise.